Look into the database (vault)

In this section, you will take a medium-deep dive into Corda and SQL databases.

You will do the following:

If you have never dealt with SQL databases, and have no intention of doing so, you can skip this chapter.

Care to peek into the databases of the nodes and see in detail what was stored? The problem is, the database is not accessible with an external tool. You need to do some additional configuration steps.

The database used in a development network is H2. To access it, you need to:

Follow the instructions to install the H2 Console. What the “JDBC URL” is will become clear shortly.

Stop your running nodes by typing bye into each shell. You will have to press ctrl-c in the shells for nodes Party B and Party C to return to the shell prompt.

then, inside workflow-java/build.gradle’s deployNodes.nodeDefaults, set the H2 database port by adding the below section:

On each running node shells, you should see a new line, like:

Now start the H2 console, run sh /bin/h2/bin/h2.sh or from whichever location you placed it (on Windows, launch H2 Console from the Start Menu). A window may pop up to prompt for the H2 Console URL (accept the default) or it may proceed directly to the login console, depending on your OS and the implementation:

Each time you click “Start Browser” a new tab in your default browser will open showing H2’s login console: 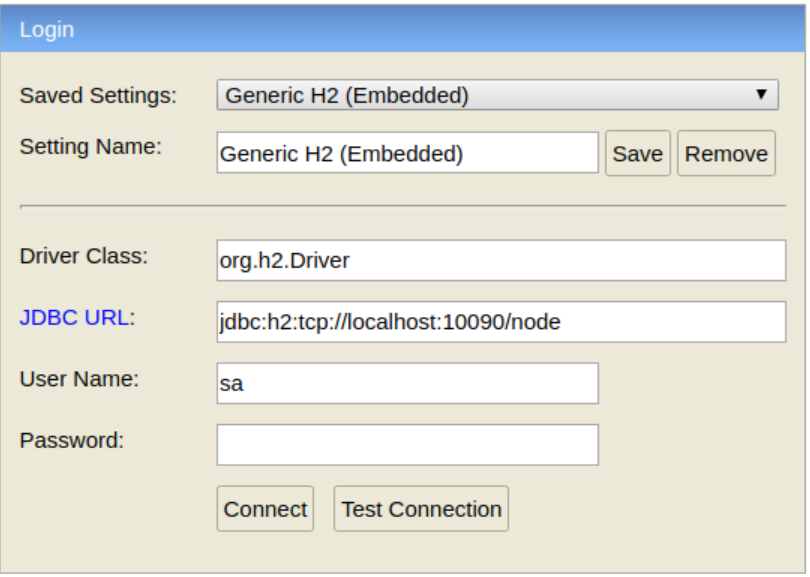 As mentioned earlier, each node terminal displays the Database connection url , so if you want to connect to a given node just copy the URL and paste it in JDBC URL in H2’s login console. Don’t change anything else. Click “Connect”.

On rare occasions, you may get an error that looks approximately like this:

Find the process called javaw.exe (or similar, depending on your OS). Terminate it. It will be restarted the next time you call for the H2 Console. Alternatively, reboot your system to resolve the issue. In effect, this is how to restart the server the console relies on. You can confirm that the process you are thinking of terminating is the console server (which may be hung or malfunctioning) by verifying that the process is indeed listening on the same port the browser is inspecting, normally port 8082.

Start by connecting to your notary on your first H2 tab. Click on NODE_NOTARY_REQUEST_LOG:

This should populate the query field with SELECT * FROM NODE_NOTARY_REQUEST_LOG. Press Run. There are no rows. This means that as of now you have not had any state that was consumed.

On another tab, connect to PartyA. Click on VAULT_STATES and Run. Again, empty.

Well, it will be the first as far as these newly reconfigured nodes are concerned. Just like before, run this in the shell on the PartyA node:

Back to PartyA’s H2 browser tab. Rerun the VAULT_STATES query. Now you have 1 state. The IOU you just created. Notice how the state mentions:

Now, run the same * query on another table: SELECT * FROM IOU_STATES . Here again, you have a single state:

And yes, it displays expected values, with, you will note, the same column names as were defined in the IOUState’s schema.

You will recall that a state is uniquely identified by the transaction that created it, and its index in the list of created outputs. This pair of identifiers is neatly packaged in the StateRef class. Therefore, you should expect to see this pair in different places:

Open 2 other tabs to your H2 console and connect to PartyB and PartyC. You can confirm that:

Digging deeper in the DB

Let us look at what else is in the database of PartyA.

Run SELECT * FROM NODE_ATTACHMENTS. You should receive your CorDapp Example contracts found in workflows-java/build/nodes/PartyA/cordapps/. Furthermore, when you run SELECT * FROM NODE_ATTACHMENTS_CONTRACTS, you will see your IOUContract associated with the attachment in question. Note that PartyC also has the same attachments. In effect, the vault has been primed with these jar files. It has not waited for a flow to add them. And indeed, a flow does not add jars, as you will see below.

If you run SELECT * FROM NODE_INFO_HOSTS, you get 4 rows, one for each Notary and PartyA to C as defined in build.gradle. You can look at a few other tables that all deal with identities.

If you run SELECT * FROM NODE_TRANSACTIONS, you will see one row. The state machine id is that of the machine that ran the creation flow of this transaction. Recall that a flow may be checkpointed to disk. This is what this state machine represents. It is the machine in which the flow unfolds.

Turn your attention from the database to PartyA’s interactive shell:

This vaultQuery command was declared here.

There are other commands found in this file. Let us try:

Here, you see you can ask:

If you are curious about how this parameter passing works its magic, look over here for Parameter syntax.

Again, you will use PartyA as the lender, but PartyC will now be the borrower. This time, you are going to experiment with a checkpointed state machine. You will remember that a checkpoint happens when a flow is waiting for something coming from elsewhere. In the IOU case, PartyA has to wait for PartyC to return the transaction it signed. It is at this point that PartyA will checkpoint. PartyA will checkout whether PartyC is running or stopped.

However, for PartyA’s checkpointed state to last long enough for you to see it, you will first stop PartyC. Type bye into PartyC’s shell. While you are at it, also stop the Notary.

Now back in PartyA’s shell:

It remains stuck at Collecting signatures from counterparties. That makes sense because PartyC is down. You will note that the steps are made explicit in the code itself.

Do not interrupt PartyA’s flow. Return to your H2 console connected to PartyA and run the following queries:

Ok, start PartyC again. You will start the individual node from the workflows-java/build/nodes folder that was created by ./gradle deployNodes.

Did you get this error?

If yes, look back at the “Prepare your computer” chapter, and look for the part about running a JAR with a different version than your default. That may mean running something like:

Back to PartyA’s shell. It takes perhaps a minute for it to retry again and finish the flow. Notice how it also went through the “Notary” parts even though the notary is down. Indeed, the transaction proposal has no input states so no Notary is involved.

Again, you can go to your H2 console and confirm the new state has been persisted and there is no longer any node checkpoint.

Tweak at the edges

You have seen that the notary was not contacted on the creation of the IOU. And, since you have yet no flow that consumes an input state, you have no way of observing the notary’s inner workings.

What if you said the notary should also be validating? In workflows-java/build.gradle: 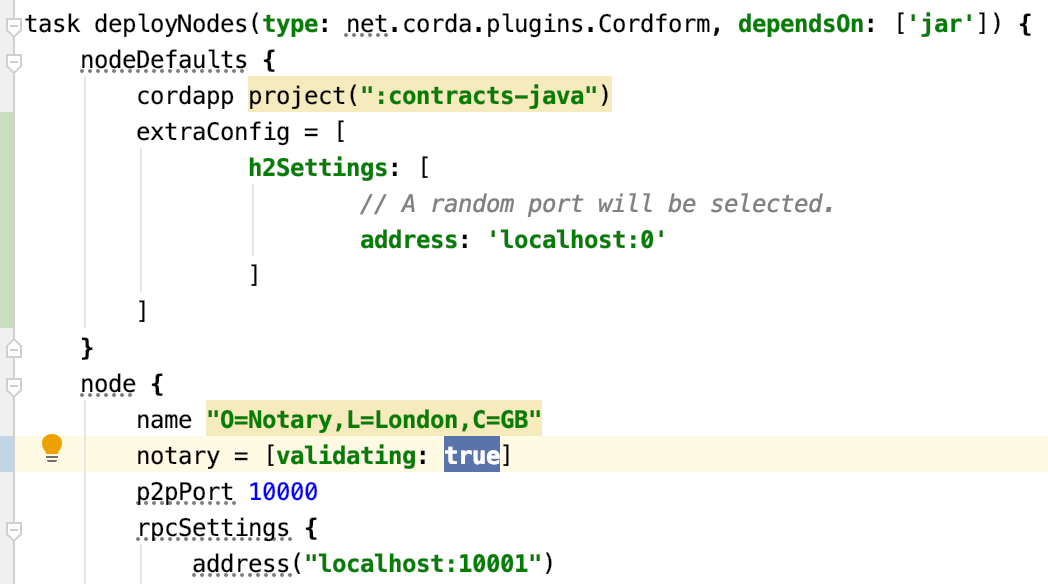 Make the change, be sure your working directory is samples/cordapp-example and recreate the nodes with ./gradlew --build-file workflows-java/build.gradle deployNodes. Confirm the change has been effected in the build/nodes/Notary/node.conf file:

Here you need to close all the previously launched nodes. That is 4 terminal tabs in all. You should also close your H2 Console browser tabs because the nodes are configured to use random database ports. Then:

Ok, so your Acceptor flow can be triggered remotely by a party that launches the Initiator flow. Is this so mechanical? You saw that your nodes/PartyA/cordapps/cordapp-example-contracts-0.1.jar file was referred to in the H2 database as an attachment. So now, redeploy your nodes and remove this jar file from PartyB:

That is good to hear. The node needs to enable the contract jar files if it wants to, in effect, reply to approved flows. You can do something similar by removing only cordapp-example-workflows-0.1.jar. It will simply never reply - a dead letter.