Here, you are going to explore the Tokens SDK. In the next chapter, you will learn how to use it in practice.

As a broad concept, a token can be one of 2 things:

The Tokens SDK was introduced in Corda 4.3, but that doesn’t mean that you weren’t able to create tokens before that. And indeed, you did just that in the previous exercise. At the end of the day, a token is one or a combination of ContractState, LinearState, OwnableState, or FungibleAsset with 3 commands: Issue, Move, and Redeem. So R3 took all that and built a comprehensive SDK with new states, contracts, flows, services, utility classes, and lots of examples.

The SDK introduced a lot of new components, so you’ll start with a high level overview of the design, then dig deeper into each separate component.

The below diagram is a simple flow to help you choose the building frame of your token. An explanation of the referenced classes follows: 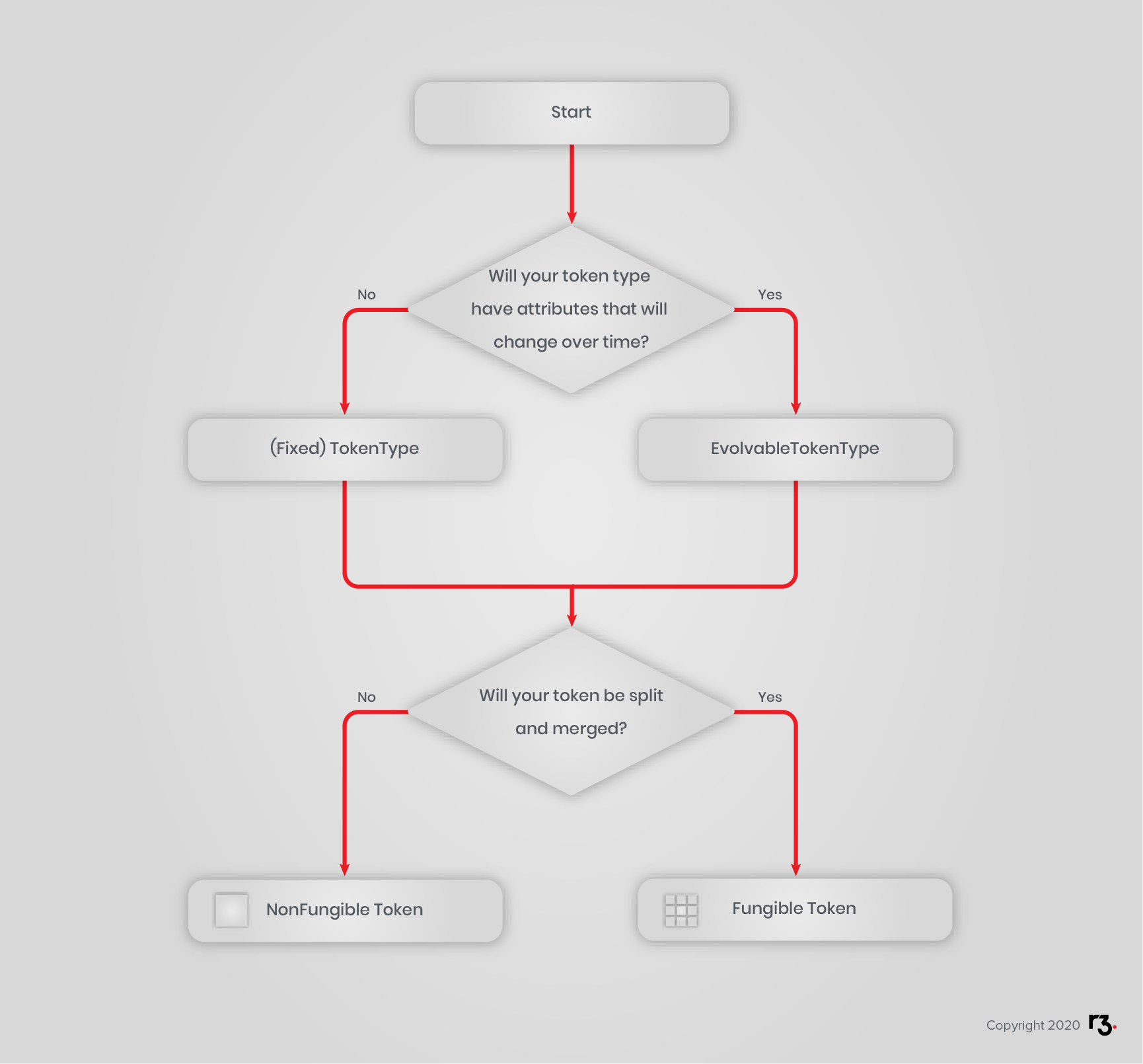 TokenType is your fixed unit; you issue tokens of that unit. It only requires an identifier, e.g. USD, and the number of fraction digits, which essentially defines the smallest denomination of your token.

You can extend TokenType and add your own custom attributes. Be cautious with that because such attributes are unchangeable, by design. For example, a CryptoKitten token-type would specify a breed and such an attribute is not changeable, by nature, over the life of the cat. An implementation would look like this: 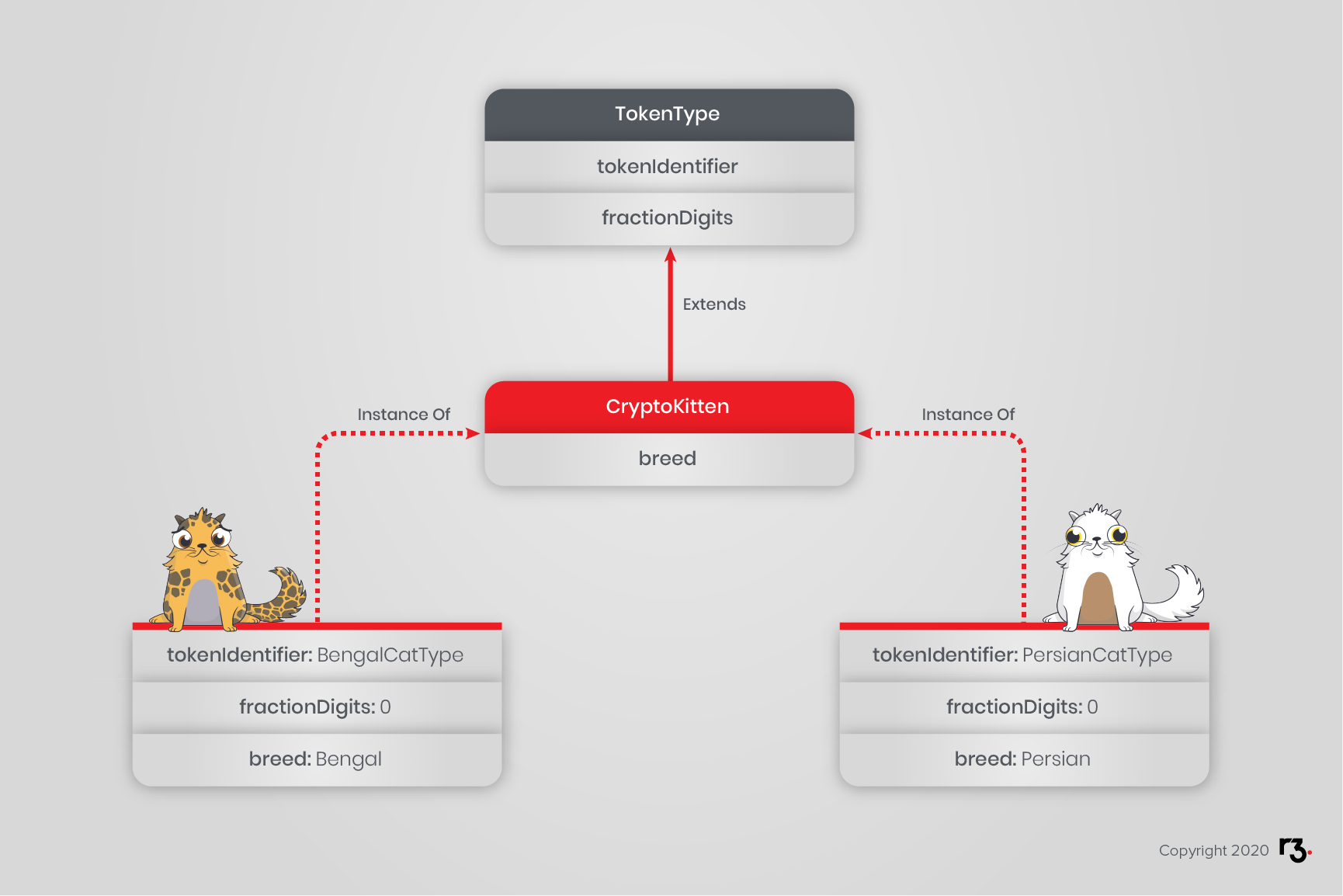 Custom token attributes are unchangeable, by design, so use them for properties that should be immutable.

Unlike a TokenType instance, which never changes, an EvolvableTokenType instance is a LinearState instance that (shocker!) evolves over time. Like any state, they can only be created and updated according to rules, in this case when signatures, i.e. approvals, are gathered from a list of maintainers identified in that state. Additionally, flows are provided to facilitate this transition.

Let us consider using EvolvableTokenType to represent a car, for example. A car has immutable properties as well as changeable properties that evolve over its lifecycle. Its make (brand), model and VIN (vehicle identification number) are unchangeable, but its mileage and price change over time.

To create your evolvable unit, you need to extend EvolvableTokenType and add your custom attributes. For the example, you can represent a car unit as a CarTokenType. Remember, you first need to define a unit. Only then can you issue tokens of that unit. The token type will have updateable attributes, price and mileage, and fixed attributes, make and VIN number. 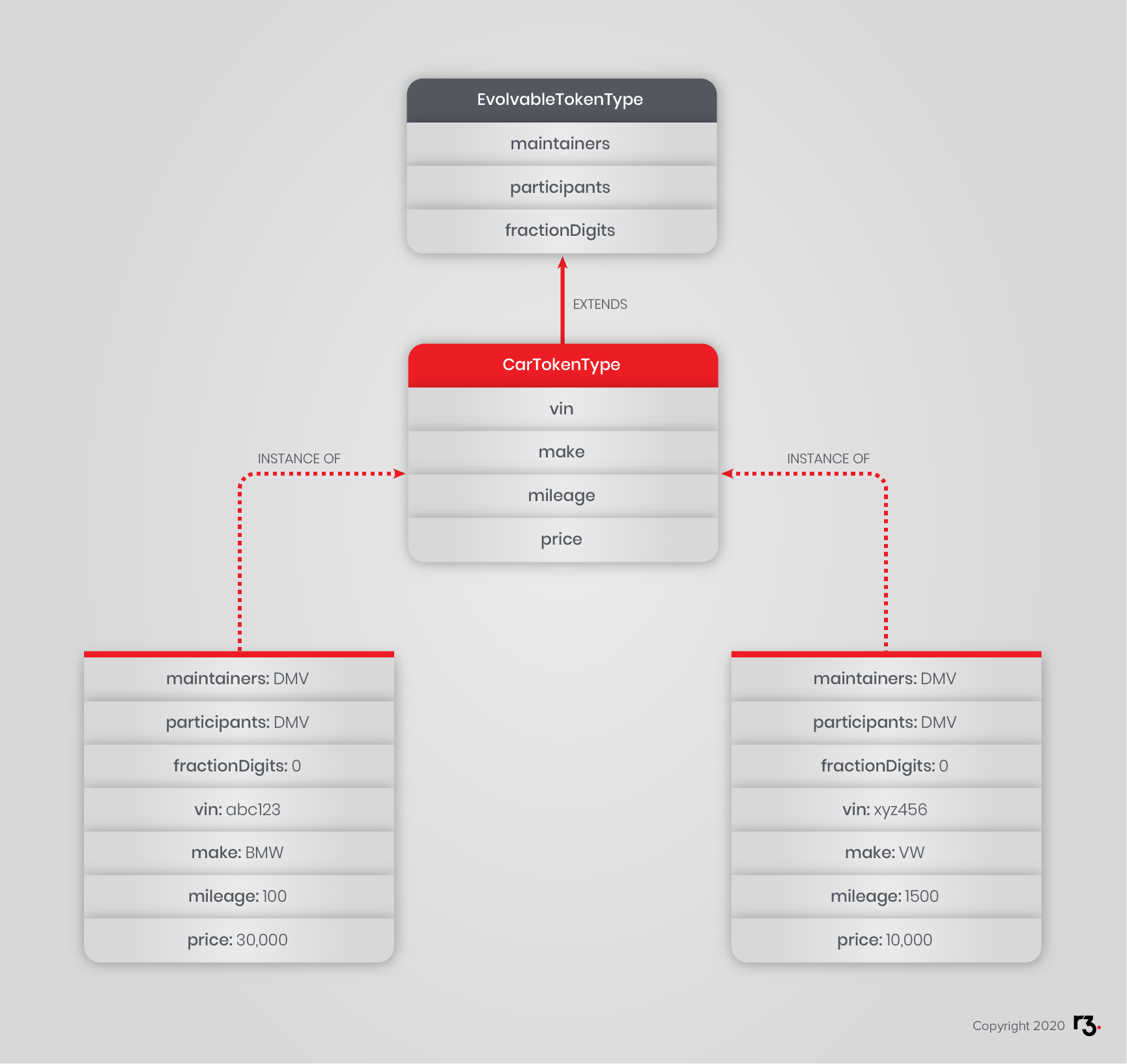 Where DMV is the Department of Motor Vehicles, beloved by Americans.

Inside your evolvable token type contract, you can control which attributes are allowed to change and which are not, among other business rules: 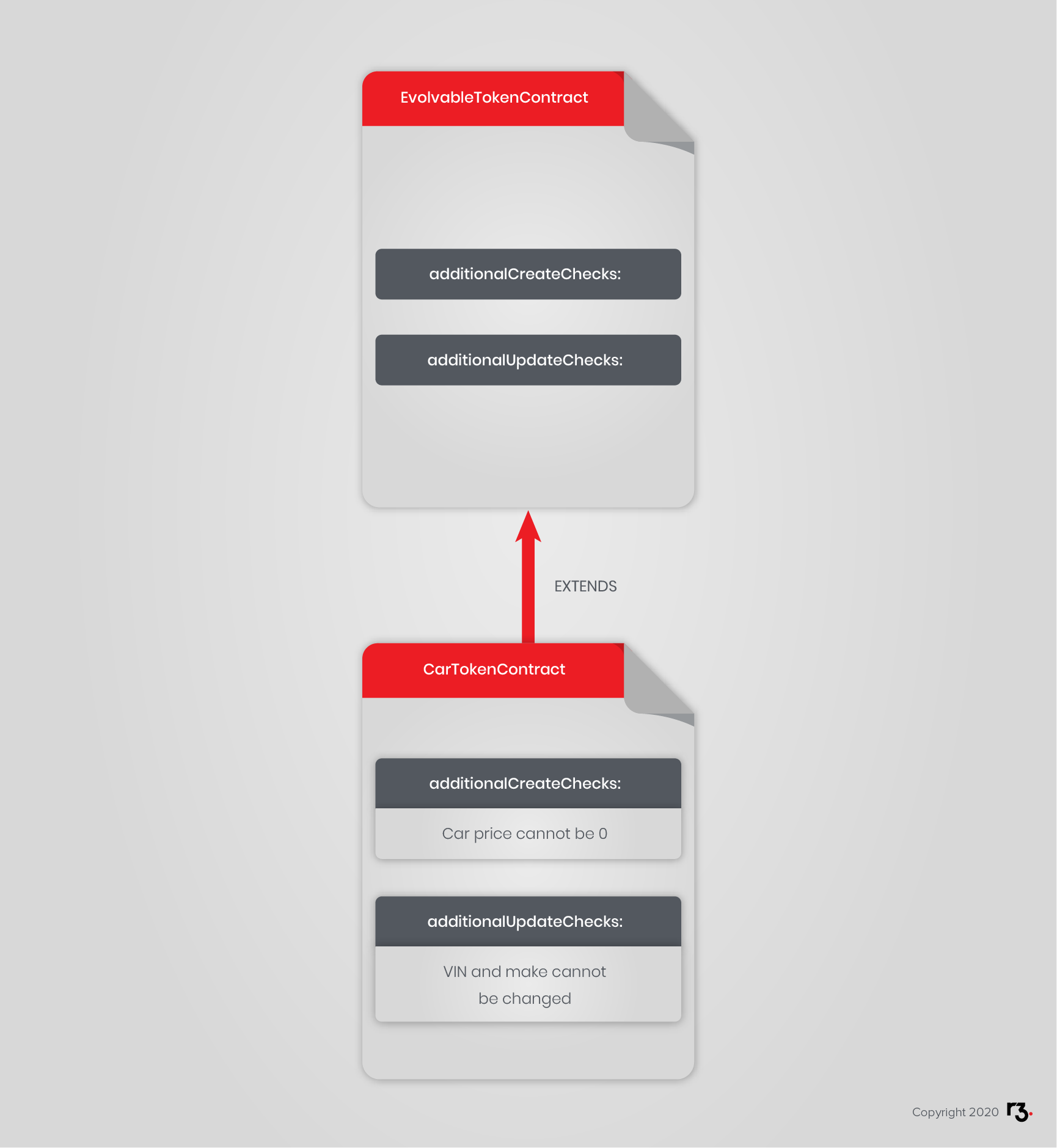 In the example, the DMV (Department of Motor Vehicles) is the maintainer of this evolvable token type, meaning, when a new car gets registered in the department, it will create an instance of the CarTokenType. When the car passes the yearly inspection, a DMV agent will update the mileage of the car. 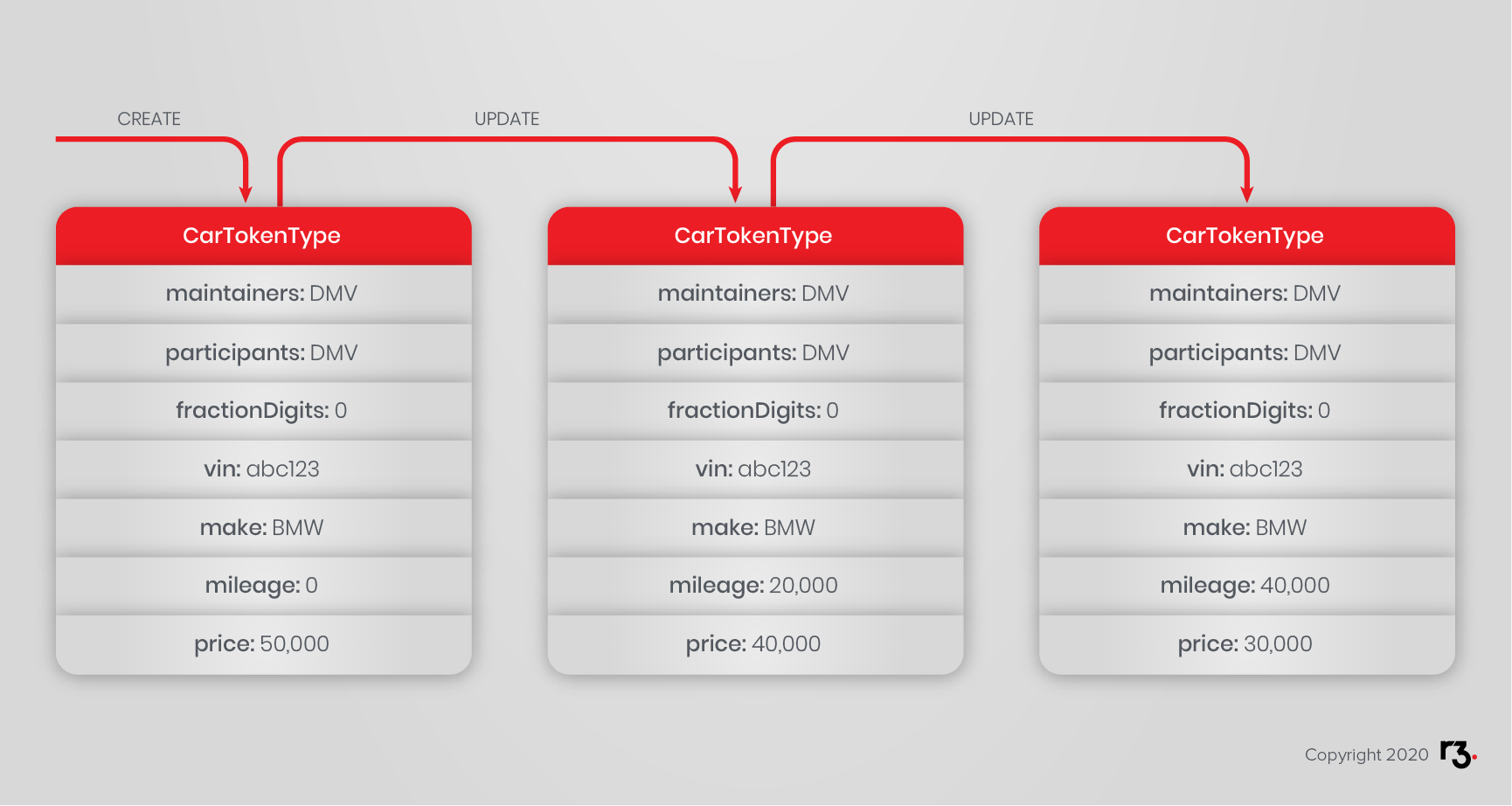 Reminder: A state in Corda is final; it cannot be updated, only transformed from one version to another via a transaction. How does one achieve an effect that resembles an evolving state? That’s where LinearStates come to the rescue. In order to update a LinearState, you consume the old version and create a new one which has the updated values but the same UniqueIdentifier linearId. So, in order to view all of the versions of a certain LinearState, you can simply query the vault by that state class and its linearId.

To avert a possible misunderstanding, the EvolvableTokenType class does not inherit from the TokenType class. You will see the mechanism shortly.

Fungibility is a property of a commodity whose individual units are indistinguishable from others. Pure gold is fungible because an ounce of it is materially indistinguishable from any other. Fungibility is an important property of money, currency, many securities and commodities because it implies that quantity alone is a sufficient description. If someone says “USD $100,” everyone knows what that means because US Dollars are fungible. One would not ask “Which dollars?”

FungibleToken is the state that assembles the relationship between the issuer, the holder and the quantity. It achieves it by nested composition: 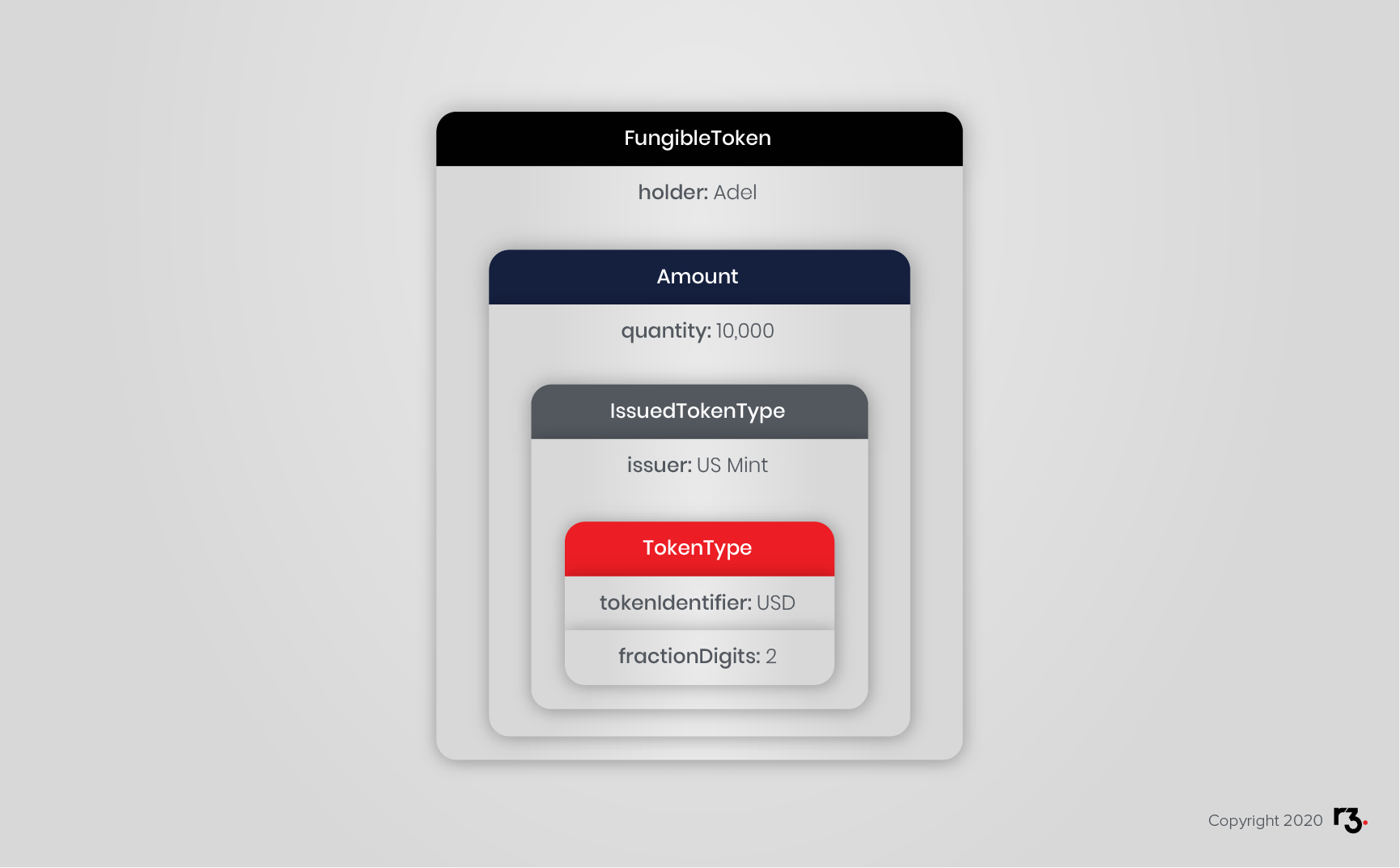 Here, Alice has one token state with a quantity of 5, which she spends to cover the required quantity of 4 (1 for Bob and 3 for Carol), and gets a quantity of 1 as change.

Here Alice spends 2 tokens, each with a quantity of 2, to cover the required output quantity of 4, split between as 1 for Bob and 3 for Carol.

A non-fungible token (a.k.a. NFT), also defines the relationship between the issuer and the holder, but, it cannot be split or merged, it doesn’t have a quantity; or rather it always has a quantity of exactly 1. It is unique. It is, in fact, the responsibility of the developer to ensure that no two instances of an NFT refer to the same off-chain or on-chain object, if applicable, which would defeat the purpose of a representative token.

A house is a good example of a non-fungible token. Each is a unique property. They are not exchangeable without careful scrutiny. This unicity is expressed with meta information. For example, giving each house a unique lot ID and street address. The property developer will take great care to avoid issuing two house token instances for the same house, possibly in the creation flow. Well, they could, technically, assign the same address twice, but that would probably be a defect that opens a can of worms.

Returning to the evolvable CarTokenType example, a car is another example of a non-fungible token. They are also not mergable since, sadly, one cannot make a luxury sports car from two economy sedans.

Here too, the relationship is achieved by nested composition: 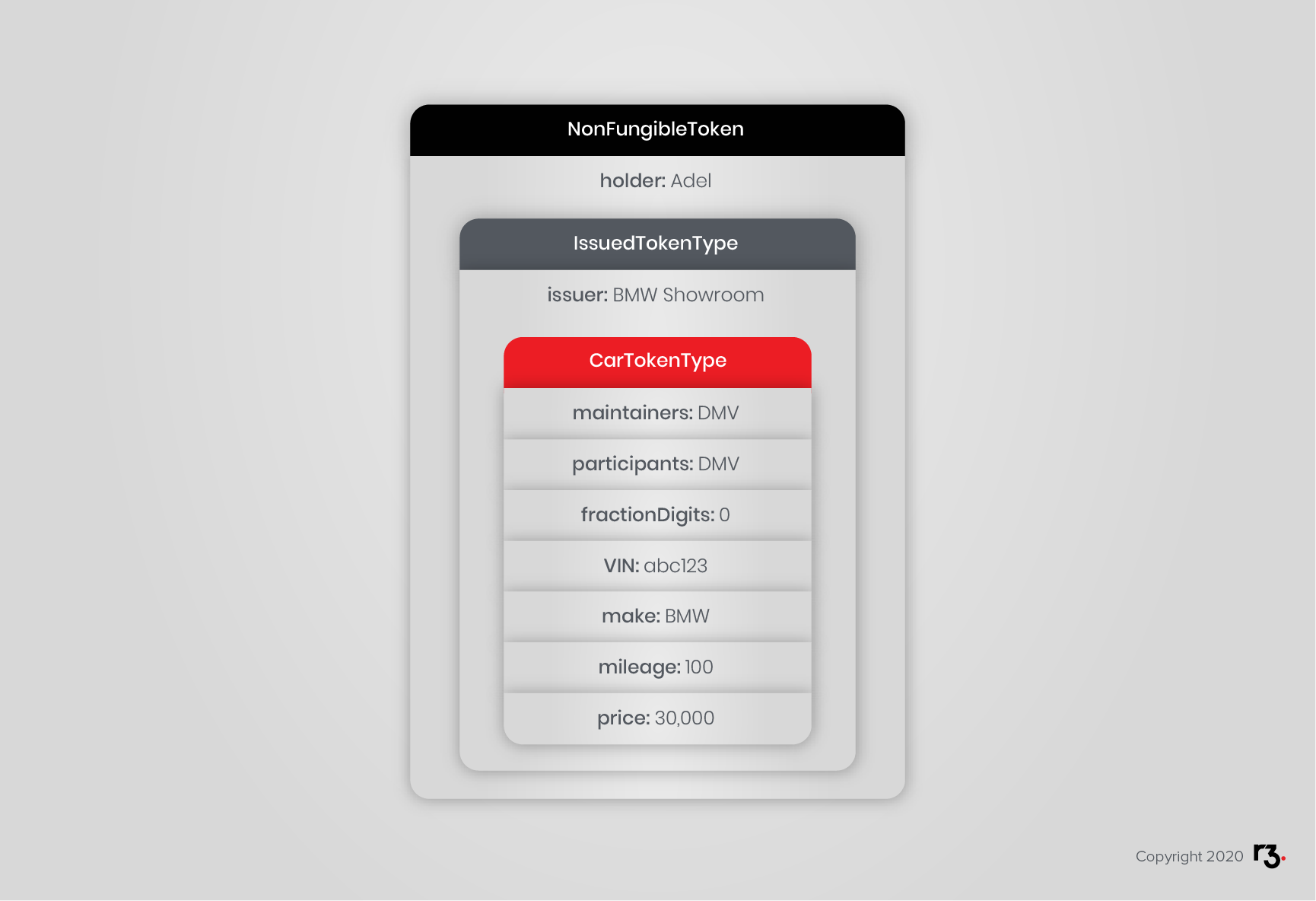 Notice in the above example how the issuer and maintainers are different entities declared in different classes. Let’s suggest a series of steps that could take place in the car example:

Just because something is non-fungible in real life doesn’t mean you have to treat it as a NonFungibleToken on the ledger. It all depends on your business case, and that’s where the design decision of having a token-type and a fungible / non-fungible token of that token-type came from.

For instance, a house is something non-fungible, you can’t physically split a house. But let’s say you have a CorDapp where several people can invest and buy one property. Then they rent it out and split the return on their investment. For this, you can create a token-type House and issue several FungibleToken instances of the same House, where the quantity of each token is different and represents the ownership share of the holder in that house. This way anyone can sell their share to multiple buyers or buy from multiple sellers, which, in Corda, would be splitting and merging the FungibleToken of the House token-type.

Let’s first introduce the LinearPointer class, which, while not a LinearState, still points to one. If used in a standard ContractState, a LinearPointer can be used to loosely couple the two states. This LinearPointer does more than hold a linearId. It also assists you in retrieving, or resolveing, the state it is pointing to. And yes, it resolves to the latest version it has in the vault. It is as if the pointer was following the state around as it changes. So, you understand that the EvolvableTokenType instance can be pointed to by an instance of a LinearPointer.

So there you have it. To access the underlying EvolvableTokenType instance of your NonFungibleToken instance, you need to:

You may have to do some aggressive casting do get the desired sub-class. Also note that your latest resolved EvolvableTokenType instance is as good as your vault knows. If your vault was not informed of changes, then your vault is still on an older version, without your knowledge. 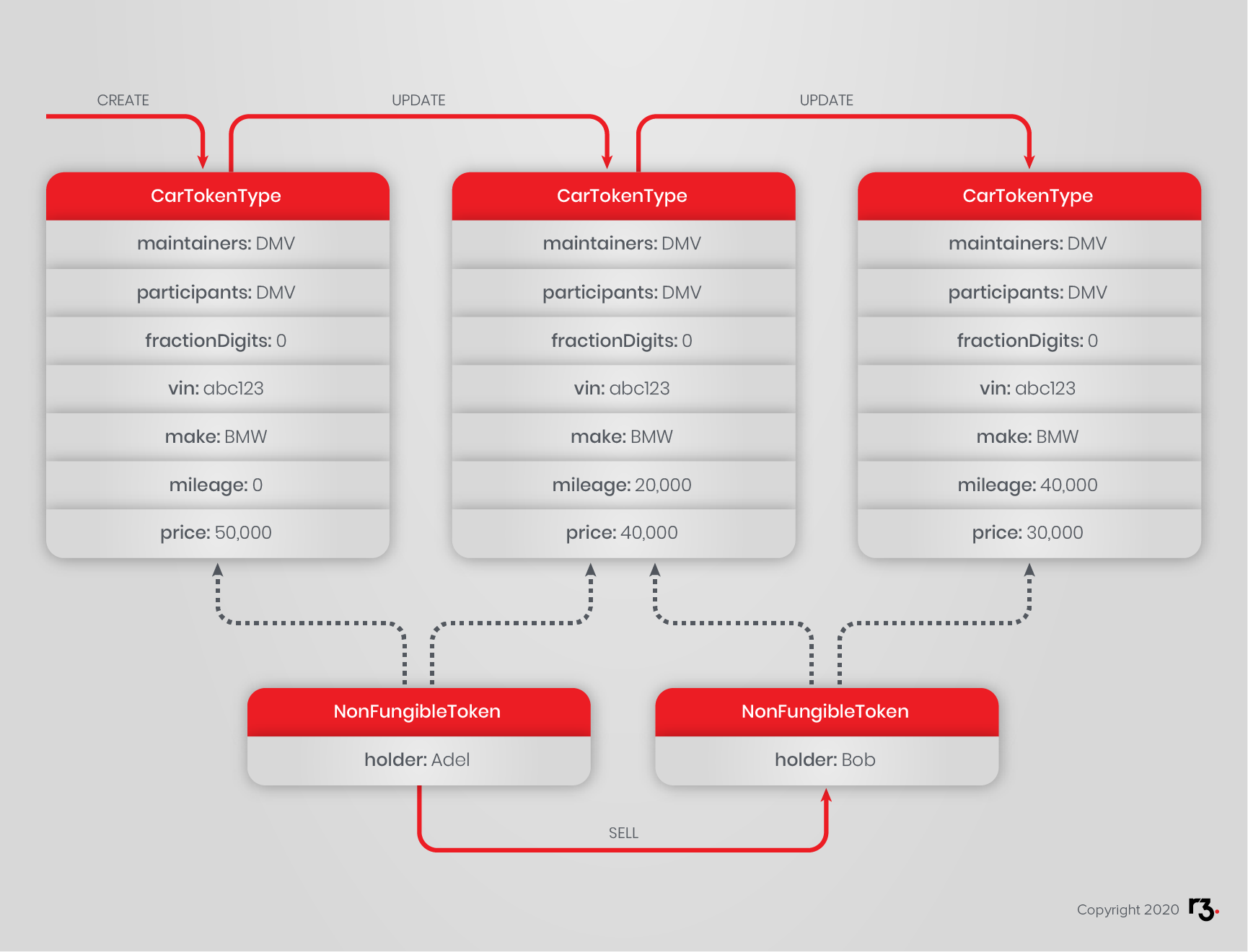 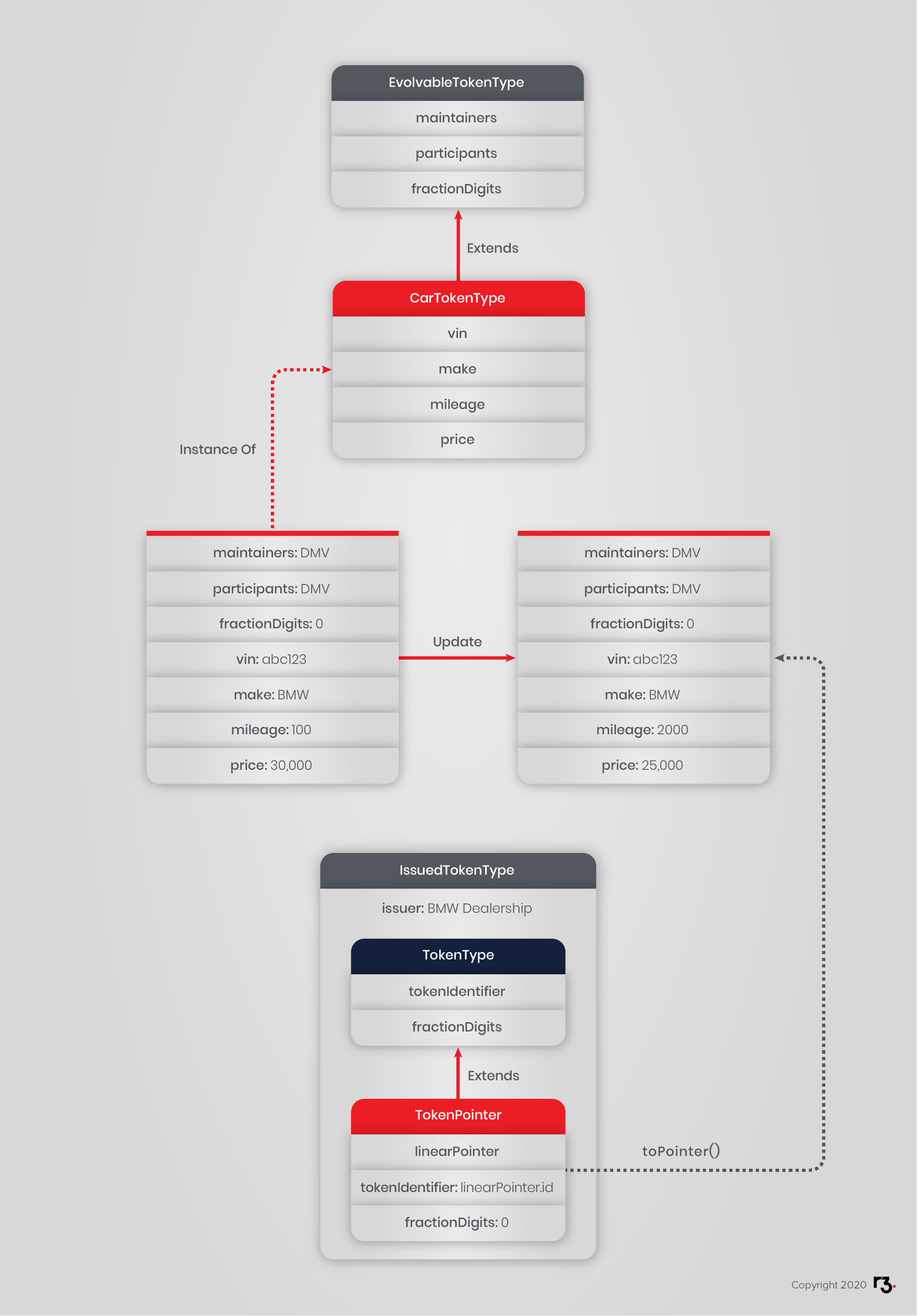 One last bit about EvolvableTokenType, once created an instance can only be updated, never destroyed. It is a linear state that lives on forever since it has no destroy command. Why?

Well, there is a logical dependency from the tokens that represent ownership to the EvolvableTokenType instance. Absent an enforcement mechanism that provides assurance, the tokens ought to be all redeemed before the token type itself be destroyed, at the goodwill of participants. This is not very DLT-like…